Adds awards/achievements to Minetest (plus a very good API).

Majority of awards are back ported from Calinou's old fork in Carbone, under same license.

An award is a single unlockable unit, registered like so:

Awards are unlocked either using awards.unlock() or by a trigger being fullfilled. A trigger is a condition which unlocks an award. Triggers are registered at the same time as an award is registered:

The above trigger type is an example of a counted_key trigger: rather than a single counter there's a counter per key - in this case the key is the value of the node field. If you leave out the key in a counted_key trigger, then the total will be used instead. For example, here is an award which unlocks after you've placed 10 nodes of any type:

You can also register an Unlock Function, which can return the name of an award to unlock it:

The above is a bad example as you don't actually need the stats data given. It would be better to register a dignode callback and call awards.unlock() if the condition is met.

The trigger type is used to determine which event will cause the trigger will be fulfilled. The awards mod comes with a number of predefined types, documented in Builtin Trigger Types.

A trigger type has a type as well, which determines how the data is stored and also how the trigger is fulfilled.

As said, you could use a custom trigger if none of the other ones match your needs. Here's an example.

Difficulty is used to determine how awards are sorted in awards lists.

Callbacks (register a function to be run)

(for all types) target - how many times to dig/place/craft/etc. 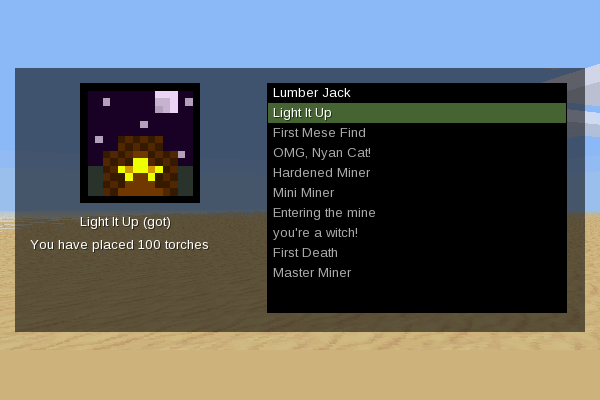