This is a mod for games that run on the Minetest engine such as Carbone, Technic, and Moontest. It is designed to encourage exploration of programming and other technical skills by adding programmable unixlike servers.

Do not use this mod on public servers; it still has serious security issues.

Download the modpack and place it in the mods/ subdirectory of your Minetest installation. See the wiki for details on installing mods.

In order to run the latest version from source, clone this repository into your mods/ subdirectory and grab orb and diginet mods as well.

In order to start, you'll need to place a server block, then place a terminal near it. Right-click on the terminal and log in to the server using =login (10,1,5) singleplayer where the first argument is the position of the server you've placed and the second argument is your current player name. (Note that servers can have users with any name, but when you place a server, the only user that exists at first is one named after your player.) At that point you can enter shell commands.

You can get reasonably far by just treating it like a unix with lots of missing parts, but for a more thorough explanation see the orb readme.

You can create simple files with echo hello > greeting, but for larger files you are going to want to use a text editor node. Place it and set the server field to the server on whose filesystem you want to edit a file. Enter a path, and hit load to edit an existing file, or just start typing and hit save to create a new one.

Remembering the positions of your servers can be a bit of a drag. The DNS server node from diginet allows you to add aliases for any given position so you can just type an easy-to-remember name instead of a bunch of numbers for the position.

No crafting recipes have been added yet, so you must use creative mode.

Calandria servers include a few scripts to work with some 3rd-party mods.

This allows you to remotely reprogram a Luacontroller, from the Mesecons mod. You can also use the setports script to turn on and off its outputs:

The Luacontroller at 5,2,-17 will have its A, B, and D ports turned on and its C port turned off.

You can also send messages over the Digilines protocol:

Although digiline messages can be of any Lua type, the script only supports string messages. To send non-strings, you can write your own scripts that call the digiline function with channel and message arguments.

Terminals, servers, and editors communicate with each other using the diginet protocol, which has some similarities to digilines, but is wireless and sends messages without any propagation delay. You can create your own nodes which accept diginet messages, and you can send diginet messages from servers, either from your own programs or on the command line.

In his 1980 book Mindstorms, Seymour Papert describes what he calls "Piagetian learning", which is the process whereby children acquire language at a young age without any formal instruction. Papert posits that cultures can teach certain topics effortlessly as long as the culture is rich in concepts a learner can appropriate and use to model the topic in their head, and that classroom learning is introduced when the culture fails to provide the means necessary to learn important topics.

The focus of his book is how the presence of a computer can provide conceptual "materials" suitable for the construction of the kinds of models that make acquiring mathematical knowledge come as naturally as learning French comes to a child growing up in France; in fact the metaphor of "growing up in Mathland" serves to illustrate how topics which seem difficult when taught in a classroom setting can be learned effortlessly when the surrounding culture provides the necessary building blocks of knowledge.

The book describes labs in which children learn using Logo, a language allowing them to draw patterns on the screen by programming a "turtle" avatar's motions. The turtle and its commands function as a particularly apt source from which to build models of many aspects of computation and mathematics, as he repeatedly demonstrates.

While this was groundbreaking at the time (and can still be used to great effect) children now are already immersed in computer environments without needing one to be introduced by educators. The purpose of this project is take a voxel exploration game and turn it into an environment which better serves to encourage Piagetian learning, particularly about Unix and introductory programming.

ComputerCraft is a mod for MineCraft that has computer blocks as well as programmable turtles that can manipulate the environment. However, it is not free software, nor is the engine on which it runs, which renders it unsuitable for our purposes. The terminal and editor it implements is very good, but the OS is single-user.

DroneTest has programmable computer nodes as well as drone entities that can move around, but it does all its output by generating textures for the display node every time it needs to change, and the Minetest engine does not garbage collect old images. This means every DroneTest game will eventually run out of memory. In addition, it does not implement a terminal, relying instead on line-by-line commands. Also: the name is cringe-worthy.

Hoverbot is another programmable robot mod which uses visual drag-and-drop programming similar to Scratch, but without loops or any higher-level features than imperative commands.

A Minetest pull request implements the ability to accept character-based input instead of line-based input, but it has not been merged and hasn't seen any activity since December of 2014. It is just the first prerequisite to building a terminal in Minetest, but it looks promising.

The Terminal Minetest mod claims to implement a terminal, but it doesn't. It only allows for shell commands to be run using a line-based input, and streaming output to the messages output.

It seems like implementing a terminal is going to be the biggest technical challenge for this mod since no one has so far accomplished this satisfactorily.

Interacting with the terminal is not as nice as it should be. In particular, when output comes in from a server, the input field is cleared, and pressing enter closes the terminal. You can work around the latter by pressing tab to focus the "enter" form button, hitting enter, and hitting shift-tab to focus back on the input field.

This mod is not suitable for public servers due to security concerns. Note that all chat commands run on a server node are run as the player who placed that node, which is a definite security concern in some contexts. Please note that it's easy to make programs which will bring Minetest to a halt. 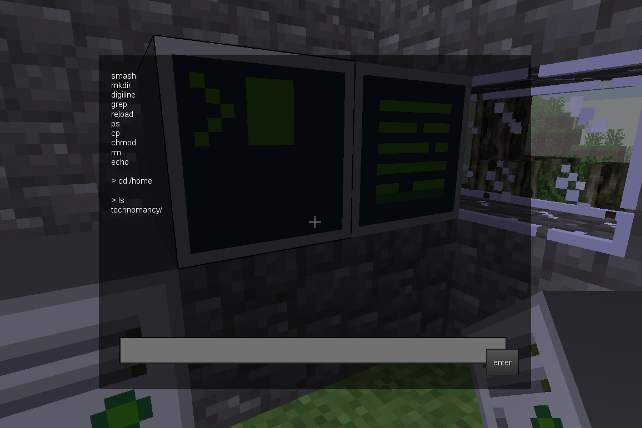