The player can place these pots as normal nodes, and then right-click the pot with a plant or plantlike node, and the pot then will contain a slightly smaller version of the plant. If punched, the plant that was put in the pot will be returned to the puncher.

The concept works through the use of object materials. The empty flowerpot node has the same model, but part of the mesh is transparent and therefore not visible. If a plant is inserted, the transparent textures are replaced with the texture of the plant node, and thus it looks like the plant is inserted, while effectively the pot is a single node without metadata.

There are no crafting recipes for each variant. The player can craft pots and potentially use /giveme to give filled versions of the flowerpot, but the creative inventory does not contain them as they are easily filled already.

The model was made in blender from scratch by the author.

The flowerpot mod has an API that can be used by other mods to create new plant-flowerpot combinations. See api.md for usage information. 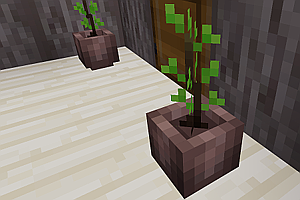