The ultimate in-game world editing tool for Minetest! Tons of functionality to help with building, fixing, and more.

For more information, see the forum topic at the Minetest forums.

New users should see the tutorial. 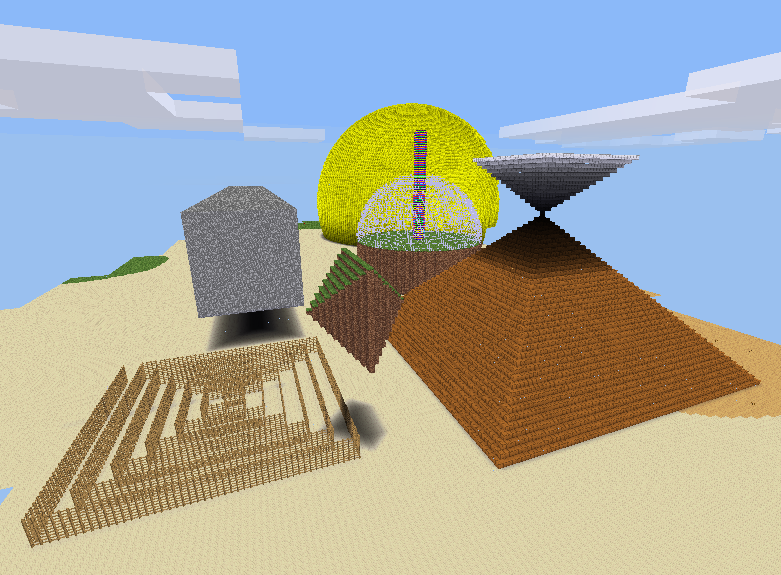 There is a nice installation guide over at the Minetest Wiki. Here is a short summary:

If you are having trouble, try asking for help in the IRC channel (faster but may not always have helpers online) or ask on the forum topic (slower but more likely to get help).

WorldEdit works primarily through the WorldEdit GUI and chat commands. Depending on your key bindings, you can invoke chat entry with the "t" key, and open the chat console with the "F10" key.

WorldEdit has a huge potential for abuse by untrusted players. Therefore, users will not be able to use WorldEdit unless they have the worldedit privelege. This is available by default in single player, but in multiplayer the permission must be explicitly given by someone with the right credentials, using the follwoing chat command: /grant <player name> worldedit. This privelege can later be removed using the following chat command: /revoke <player name> worldedit.

Certain functions/commands such as WorldEdit //lua and //luatransform chat commands additionally require the server privilege. This is because it is extremely dangerous to give access to these commands to untrusted players, since they essentially are able to control the computer the server is running on. Give this privilege only to people you trust with your computer.

For in-game information about these commands, type /help <command name> in the chat. For example, to learn more about the //copy command, simply type /help /copy to display information relevant to copying a region.

The GUI adds a screen to each player's inventory that gives access to various WorldEdit functions. The tutorial and the Chat Commands Reference may be helpful in learning to use it.

The chat interface adds many chat commands that perform various WorldEdit powered tasks. It is documented in the Chat Commands Reference.

WorldEdit works quite well with other mods, and does not have any known mod conflicts.

WorldEdit GUI requires one of sfinv (included in minetest_game), Unified Inventory or Inventory++ or Smart Inventory.

If you use any other inventory manager mods, note that they may conflict with the WorldEdit GUI. If this is the case, it may be necessary to disable them.

WorldEdit exposes all significant functionality in a simple Lua interface.

Adding WorldEdit as a dependency to your mod gives you access to all of the worldedit functions. The API is useful for tasks such as high-performance node manipulation, alternative interfaces, and map creation.

AGPLv3 compatible mods may further include WorldEdit files in their own mods. This can be useful if a modder wishes to completely avoid any dependency on WorldEdit. Note that it is required to give credit to the authors in this case.

This API is documented in the WorldEdit API Reference.

The coordinate system is the same as that used by Minetest; positive Y is upwards, positive X is rightwards, and positive Z is forwards, if a player is facing North (positive Z axis).

When an axis is specified in a WorldEdit chat command, it is specified as one of the following values: x, y, z, or ?.

In the GUI, there is a dropdown menu for this purpose. The "Look direction" option has the same effect as ? does in chat commands.

Node names are required for many types of commands that identify or modify specific types of nodes. They can be specified in a number of ways.

First, by description - the tooltip that appears when hovering over the item in an inventory. This is case insensitive and includes values such as "Cobblestone" and "bronze block". Note that certain commands (namely, //replace and //replaceinverse) do not support descriptions that contain spaces in the <searchnode> field.

Second, by name - the node name that is defined by code, but without the mod name prefix. This is case sensitive and includes values such as "piston_normal_off" and "cactus". Nodes defined in the default mod always take precedence over other nodes when searching for the correct one, and if there are multiple possible nodes (such as "a:celery" and "b:celery"), one is chosen in no particular order.

Finally, by full name - the unambiguous identifier of the node, prefixes and all. This is case sensitive and includes values such as "default:stone" and "mesecons:wire_00000000_off".

The node name "air" can be used anywhere a normal node name can, and acts as a blank node. This is useful for clearing or removing nodes. For example, //set air would remove all the nodes in the current WorldEdit region. Similarly, //sphere 10 air, when WorldEdit position 1 underground, would dig a large sphere out of the ground.

Most WorldEdit commands operate on regions. Regions are a set of two positions that define a 3D cuboid. They are local to each player and chat commands affect only the region for the player giving the commands.

Regions are not saved between server restarts. They start off as empty regions, and cannot be used with most WorldEdit commands until they are set to valid values.

To remove the entities, simply punch them. This does not reset the positions themselves.

As of version 5, WorldEdit schematics include a header. The header is seperated from the content by a colon (:). It contains fields seperated by commas (,). Currently only one field is used, which contains the version in ASCII decimal.

The current version of the WorldEdit Schematic format is essentially an array of node data tables in Lua 5.1 table syntax preceded by a header. Specifically it looks like this:

The ordering of the values and minor aspects of the syntax, such as trailing commas or newlines, are not guaranteed to stay the same in future versions.

The WorldEdit Schematic format is accessed via the WorldEdit API, or WorldEdit serialization chat commands such as //serialize and //deserialize.

The second is the Minetest Schematic format (MTS). The details of this format may be found in the Minetest documentation and are out of the scope of this document. Access to this format is done via specialized MTS commands such as //mtschemcreate and //mtschemplace.

WorldEdit would not be possible without the contributions of many developers and designers. Below, they are listed alphabetically:

This mod is licensed under the GNU Affero General Public License.

Basically, this means everyone is free to use, modify, and distribute the files, as long as these modifications are also licensed the same way. Most importantly, the Affero variant of the GPL requires you to publish your modifications in source form, even if the mod is run only on the server, and not distributed.